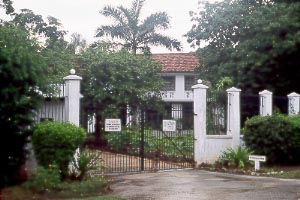 After completing his education at Repton, Dahl decided that he wanted a career that would take him to “wonderful faraway places like Africa or China” (Boy, 166). He won a coveted position with the Shell Company and spent two years training in England. Soon after he was posted to East Africa and started off on the two week sea voyage to get there. This voyage marks the end of Boy and the beginning of Going Solo. Once he reached Mombasa (in Kenya), Dahl transferred to another ship for the voyage down to Dar es Salaam in Tanganyika (now Tanzania). There he lived with two other Shell representatives and the three of them together administered the entire vast East African territory. Going Solo describes many of the exciting adventures Dahl lived through, including the time a green mamba1 entered his friend’s house and the snake-catcher had to be called in. Another time a lion carried off a native woman, and Dahl’s subsequent account of her rescue was printed in an African newspaper and became his first published work.

In 1939, it became clear to Dahl that something big was coming. It was World War II. Soon all the Englishmen in the territory were rounded up and transformed into temporary soldiers, responsible for containing the German population. This experience prompted Dahl to formally join the RAF (Royal Air Force) and learn to fly warplanes. Thus in November 1939 he drove cross-country to Nairobi to enlist and was awarded with the rank of Leading Aircraftman (LAC). After eight weeks of basic training and six months of advanced flying instruction, the RAF deemed him ready for battle.

Unfortunately Dahl’s very first venture into combat territory resulted in his famous 1940 crash in the Libyan desert. He was flying an unfamiliar airplane (a Gladiator) and was supposed to join 80 Squadron in the Western Desert. Unfortunately the co-ordinates he was given were incorrect, and he suddenly found himself losing both daylight and fuel in the middle of nowhere. He was forced to attempt a crash landing, praying for luck that he didn’t get. His undercarriage hit a boulder and the nose of the Gladiator slammed into the sand at over 75 miles an hour. Dahl’s head struck the reflector-sight and fractured his skull, pushing his nose in and blinding him for days. He managed to pull himself from the burning wreckage, though, and was later rescued by three brave soldiers from the Suffolk regiment. After convalescing for months in various army hospitals, Dahl was finally deemed fit to resume flying duties again in the spring of 1941.

80 Squadron was now engaged in the tragic RAF campaign in Greece, and after rejoining them Dahl was soon thrust into the desperate routine of trying to stay alive. On his first trip up, he encountered six Ju 88’s (enemy planes) and managed to shoot one of them down. The next day he shot down another over Khalkis Bay. His victory was short-lived, though, as the German Messerschmitt fighters swarmed down upon him and he barely made it back to the base alive. Over the next four days he went up twelve more times, fighting against incredible odds and miraculously making it back to base each time. On the 20th of April the Germans discovered the camp and ground-strafed it, but luckily they didn’t hit any of the seven remaining aircraft. Dahl and the other man in 80 Squadron fought bravely for many more months, and their battles are described at length in Going Solo. Dahl was not fated to remain with them for long though, and when he began to get blinding headaches (from his earlier accident) he was invalided back home to Britain. His career in the RAF was over.

1. Special thanks to Hayden Simpkin for catching my earlier error; the snake was green, not black.