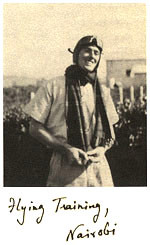 1939 – From inside the cover of Going Solo, this is a shot of Dahl at the beginning of his RAF career. He learned to fly Tiger Moths (small biplanes) over the African desert. Though originally there were 16 young men training together, Dahl later confirmed that only two (other than himself) managed to survive the War.