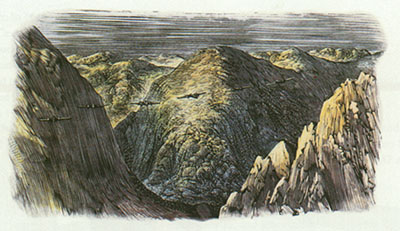 ‘Half a minute later, the dots had resolved themselves into black twin–engine bombers. They were Ju 88s. I counted six of them.’ He eventually managed to hit one of the planes. ‘Then the black smoke came pouring out of his engine and very slowly, almost in slow motion, the bomber winged over to starboard and began to lose height… He was turning slowly over and over like a leaf, the black smoke pouring out from the starboard engine. Then I saw one…two…three people jump out… I watched spellbound. I couldn’t believe that I had actually shot down a German bomber.’

These two wood–engravings are reproduced on pages 438 and 441 of The Roald Dahl Treasury illustrating ‘First Encounter with a Bandit’ from Going Solo. In this Roald Dahl relates his battle with bandits flying over a village called Khalkis in Greece.