Roald graduates from Repton and accepts a position with Shell Oil Company in London.

Roald suffers serious injuries as result of a plane crash in Libya. He spends several months in a military hospital in Alexandria, Egypt.

April 20, 1941 – Roald rejoins his squadron, then stationed in Greece, and participates in the Battle of Athens.

Roald heads to the U.S.

Invalided out of the War, Roald heads to the U.S. to take up a position as assistant air attaché at the British Embassy in Washington, D.C.

“Shot Down Over Libya”

August 1, 1942 – “Shot Down Over Libya” is published in The Saturday Evening Post. 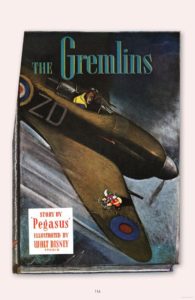 December 1942 – “The Gremlins” is published in Cosmopolitan magazine.

August 1943 – “The Sword” is published in The Atlantic magazine.

September 1944 – “Only This” is published in Ladies Home Journal magazine.

“Beware of the Dog”

October 1944 – “Beware of the Dog” is published in Harper’s Magazine.