Skip to content
His Work > Books > Boy – Tales of Childhood

Where did Roald Dahl get all of his wonderful ideas for stories?

From his own life, of course! As full of excitement and the unexpected as his world-famous, best-selling books, Roald Dahl’s tales of his own childhood are completely fascinating and fiendishly funny. Did you know that Roald Dahl nearly lost his nose in a car accident? Or that he was once a chocolate candy tester for Cadbury’s? Have you heard about his involvement in the Great Mouse Plot of 1924? If not, you don’t yet know all there is to know about Roald Dahl. Sure to captivate and delight you, the boyhood antics of this master storyteller are not to be missed! 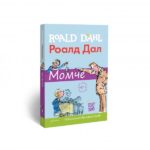