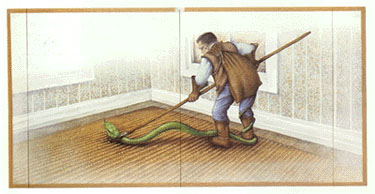 ‘Oh, those snakes! How I hated them! They were the only fearful thing about Tanganyika, and a newcomer very quickly learnt to identify most of them and to know which were deadly and which were simply poisonous. The killers, apart from the black mambas, were the green mambas, the cobras and the tiny puff adders…’ This illustration is related to an episode when Roald Dahl was visiting some friends and a green mamba slithered up the steps and into the house. The snake-man was summoned to deal with the problem. He was a Scot who liked snakes, never killed one, but captured them and sent them to zoos or for research. ‘It was a fascinating and frightening thing to watch, the little man with white eyebrows and black hair carefully manipulating his long implement and sliding the fork ever so slowly along the length of the twisting snake towards the head. The snake’s body was thumping against the coconut matting with such a noise that if you had been upstairs you might have thought two big men were wrestling on the floor.’

Bert Kitchen
The Snake Catcher
pencil and gouache
signed, inscribed and dated December 1996 in pencil on the reverse
Image size: 34 by 69.5 cm

This watercolour is reproduced across pages 420 and 421 of The Roald Dahl Treasury illustrating ‘The Green Mamba, from Going Solo.’ In Going Solo Roald Dahl describes life as a pilot for the RAF and his travels in Africa.