Skip to content
His Work > Short Stories > “Shot Down Over Libya”

This is the story of Dahl’s famous 1940 crash in the desert while flying planes for the Royal Air Force during World War II. It starts with the anonymous narrator lying in a hospital bed, trying to remember who he is and why he’s there. The rest of the narrative takes place in a flashback as he is slowly remembering it.

Spoiler warning! The squadron receives an order that there are a large number of Italian planes parked close together. Six Hurricanes (a type of plane) are to attack at dusk. After Dahl and the others take off, he devotes quite a few paragraphs to describing what the pilots actually do. In the midst of this reverie he is interrupted by the call that enemy aircraft have been spotted. Luckily they pass without recognizing them and the RAF pilots proceed on to their target. They find the parked Italian aircraft and being strafing them (diving and shooting with their machine guns). Dahl’s plane is hit by ground anti-aircraft fire, and despite his belief that he can make it back to base, he crashes nose-first into the desert. He manages to climb from the burning aircraft and collapses on the sand to await rescue. He is badly burnt and his nose is pushed in. Eventually he is found by other Allies and taken to safety: “I don’t remember much more, except that I was shoved about a lot, and someone kept saying ‘Take it easy.’ I believe someone had some morphia.” 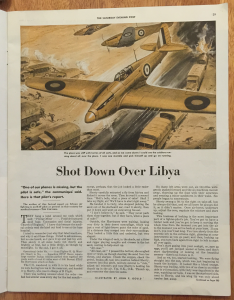 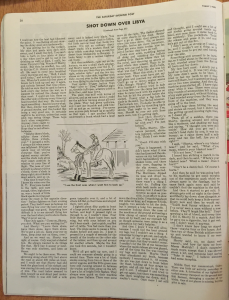 In the original version of this story (which you can read here), Dahl claims that he was shot down by enemy planes. In later versions, it was corrected to say that he ran out of fuel and crashed. What actually happened? Why are the stories different? Here are the differing accounts, as well as all the facts that I was able to dig up for you.

According to Jeremy Treglown, in mid-September 1940 Dahl completed his flying training and was ordered to join 80 Squadron in western Egypt, near the frontier with Libya. This squadron had been busy engaging the Italian army and had been forced to move its headquarters and landing grounds frequently. The day of the crash, September 19, was quiet though. Dahl took off from Abu Suweir in a Gloster Gladiator, a kind of airplane he had never flown before. “He stopped twice to refuel, the second time at Fouka, where he was given directions that may have been confused by events. 80 Squadron was not where he expected to find it, and as dusk gathered over the North African desert and his fuel gauge fell, he decided to try to land.”

This is the actual report sent in by 80 Squadron the next day:

“P/O Dahl posted to this squadron from T.U.R.P. for flying duties w.e.f. 20th September. This pilot was ferrying an aircraft from No. 102 M.U. to this unit, but unfortunately not being used to flying aircraft over the Desert he made a forced landing 2 miles west of Mersa Matruh. He made an unsuccessful forced landing and the aircraft burst into flames. The pilot was badly burned and he was conveyed to an Army Field Ambulance Station.”

Treglown goes on to describe the crash itself. He says that upon landing, the Gladiator hit a boulder and lurched forward in the sand. Dahl’s skull was fractured by hitting the metal reflector sight, and his nose was pushed back into his face. He managed to climb out of the plane before the gas tanks caught fire and was picked up later by British soldiers patrolling nearby. The squadron report got the burns part wrong, which were only slight. More serious were the injuries to his face, head, nose, and back.

“Shot Down Over Libya”

In this story from the August 1, 1942  issue of the Saturday Evening Post, the unnamed pilot is shot down while strafing enemy trucks and his Hurricane crashes in flames. (Note: the airplane has been changed from what really happened!)

“Hell’s bells, what was that? Felt like she was hit somewhere. Blast this stick; it won’t come back. They must have got my tail plane and jammed my elevators.”

“A Piece of Cake”

By the time Over to You was published in 1946, Dahl had “remembered” that he hadn’t been shot down. He appears to have tried to cover his tracks by rewriting it more factually (no Italian fighters and no battle) and calling it “A Piece of Cake.” This version also incorporates material from a little-known Dahl story called “Missing: Believed Killed.” In this version he doesn’t explicitly say that he was shot down, but he leaves it purposefully very vague and the reader assumes Dahl was shot without him ever saying it. He titles this version “My First Story – 1942” in Henry Sugar and tries to pass it off as the original version.

“I only know that there was trouble, lots and lots of trouble, and I know that we had turned round and were coming back when the trouble got worse.”

By the time he wrote Going Solo, I think Dahl knew that he was famous enough that someone would try to dig up his original story and publish the inaccuracies. So he tried to pass the blame off onto someone else.

“There seems, on re-reading it, to be an implication that I was shot down by enemy action, and if I remember rightly, this was inserted by the editors of an American magazine called the Saturday Evening Post who originally bought and published it. Those were the war years and the more dramatic the story, the better it was. They actually called it ‘Shot Down Over Libya’, so you can see what they were getting at. The fact is that my crash had nothing whatsoever to do with enemy action. I was not shot down either by another plane or from the ground.”

So my interpretation is that Dahl eventually tried to come clean about the story, but there are still some discrepancies that bother me. For instance, his claim that the Post editors deliberately changed his story contradicts his statement in Henry Sugar that not a word was touched. And what about “A Piece of Cake”? He never explains why he re-wrote the story nor why that version still gets the facts wrong.

Marvin Winitz wrote in to draw my attention to the switching of the airplane models. He notes, “People don’t always read every word and article in a magazine, but they certainly look at the pictures. The Saturday Evening Post for their own commercial reasons to sell could not possibly have shown and written about an old Gladiator biplane. Readers would have wondered are they telling about WWI or WWII. In a British TV documentary I saw recently, they showed that the Hurricane accounted for more German losses than even the Spitfire.” Marvin believes that the Post made the changes and that Dahl was shocked and simply went along with them for many years.

What do I think really happened? Dahl was in the U.S. during the War for one reason: promote the British cause and persuade the Americans to join the effort. I think he probably did write the original version of the story, thinking only of his diplomatic mission. Perhaps the R.A.F. even advised him on what factual changes to make (obviously they wouldn’t want to give out any possibly sensitive details that the Germans could pick up on). Once the War was over, though, and Dahl actually started to make his living as a writer, he realized that this initial “white lie” was going to come back to haunt him in a big way. I still have no idea why he didn’t own up to it immediately, but it may have something to do with the rumors that he was also working for British Intelligence (i.e. spying). Perhaps he thought that he shouldn’t draw attention to the subtle ways that Britain had actively campaigned for American support. I also think that he rather enjoyed the attention that he received as a “war hero” that had seen enemy action. The crash and his story about it formed part of the myth of Roald Dahl, and to admit that its foundations were a lie would damage the grandiose and romantic image of himself he had created for the public.