The Gremlins was Dahl’s very first book for children. The story was originally intended for production as an animated film by Walt Disney, but the film was dropped before it was completed. Disney did, however, still publish the book that had been created as a tie-in with the movie’s release. Only around 50,000 copies were printed worldwide, therefore copies of it are extremely rare.

In 2006, Dark Horse Comics were able to secure the rights to The Gremlins from Disney to reprint the book. They also released a line of figurines and a sequel series of comic books. You can read more information about the revival here.

During pre-production for the film, Disney was contacted by another RAF pilot, Douglas Bisgood, who claimed that Dahl had taken most of the Gremlin terminology from him without his permission. The two had met during Dahl’s journey to the US and had swapped stories of Gremlins onboard the ship. Bisgood claimed that “The names of Fifinella, Widget and Flippertygibbet are my own private property.” (Bisgood’s mother had gone by the nickname Fifinella within her family.) Rather than monetary compensation, Bisgood was keen to be credited in the film. Dahl and Disney tried to placate him by pointing out that all proceeds were being donated to the RAF Benevolent Fund, and in the end the film was never made anyway so Bisgood let the matter drop.

You can learn more about this issue and read some of the correspondence involved over at Mouseplanet. 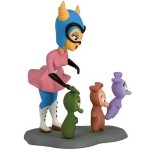 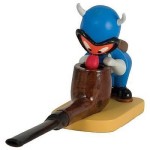 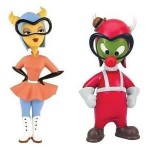 The Gremlins characters were extremely popular and featured in this 1943 advertisement for Life Savers candy:

GREMLIN CHASERS. You’ve heard of the Gremlins… pesky little troublemakers that hang around air fields… army camps… ports of call… and battle stations. One good antidote for Gremlins is LIFE SAVERS… they cheer a fellow up when the Gremlins get him down. Maybe that’s why our armed forces are ordering so many of them… so … if you have trouble getting some favorite flavor… blame it on the Gremlins.

The Walt Disney Company published several sequels in comic book form. These page are from a 1987 reprint by Gladstone Publishing Ltd. (Thank you to Marvin Winitz for tracking these down for me!)

In 2008, Dark Horse released a three-issue comic book series written by publisher Mike Richardson that took place in the modern world rather than World War II. (Issue 1|Issue 2|Issue 3) These were collected into a hardcover volume in 2015. You can read more these comic books here.