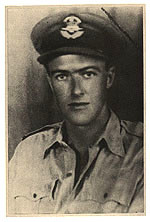 1941 – This photograph was taken a few months before Dahl’s 25th birthday. At the time, he was rejoining his squadron after having crashed in Libya a year earlier. That incident, recounted in Going Solo and Dahl’s first story “Shot Down Over Libya”, resulted in his later discharge from the RAF due to head injuries.