In case the name doesn’t ring a bell, the Church of St. Peter and Paul is the parish church in Great Missenden where Roald Dahl is buried. (They have a great website here.)

The Church is built on a massive hill and this is the lovely view of Great Missenden down in the valley. The county is called “Buckinghamshire” and I don’t think you can find a prettier place within two hours of London.

After a visit inside the Church, we set out to find Dahl’s grave. As an American, I’m used to large gravestones with the name in big letters. It was a bit of a surprise, then, to look down and discover row upon row of simple metal plaques. We had to do some hunting… but in the end we should’ve found it quicker, considering the tell-tale candy bars scattered around. (What a great idea, by the way. I wish I had thought of leaving some sort of momento.) It was such a strange moment, to be actually standing there at the final resting place of somebody that just seemed so… larger than life. It really is a beautiful spot though. I can see why he wanted to be buried there.

CONFUSION: Astute Dahl-fans will note (and I was shocked to find) that this is NOT the grave marker shown in Jeremy Treglown’s book Roald Dahl: A Biography. That one (shown at right) is an upright marker with “Roald” carved into it. I asked several people about the discrepancy (including Felicity Dahl herself), but nobody seemed to know why Treglown would have found a different marker when he visited the Church. It was suggested that possibly he visited the grave before the current headstone was finished and that the marker he saw was a temporary one that had been erected. It’s not definite though… so there’s a bit of a mystery here. Personally, I’m hoping to get in touch with Treglown himself and see if he can provide some answers.

UPDATE! I managed to contact Jeremy Treglown via email and he verified that the marker shown in the book was not permanent. He wrote, “It wasn’t long after Roald Dahl’s death when I visited the grave so, yes, the marker was a temporary one. (It takes a while to get headstones made and I think they anyway wait for the grave to settle before they put them up.) What I saw – which I described in the book – was very moving.” Thanks for your help solving that mystery, Jeremy! 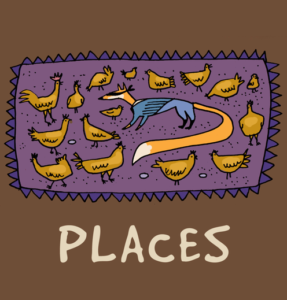