Snow White and the Seven Dwarfs was premiered in London in 1994. It is adapted from Roald Dahl’s subversive version of the well-known fairy tale from his collection of comic verse, Revolting Rhymes. It was performed by the London Philharmonic in a semi-staged version conducted by Franz Welser-Möst, and a cast including Griff Rhys Jones and Geraldine James. It has been revived in concert versions several times since then. The music, by the remarkable Jamaican composer, Eleanor Alberga, is full of drama and magic. 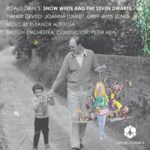