Skip to content
His Work > Essays and Articles > “The Chocolate Revolution”

This article is excerpted from Memories with Food at Gipsy House and appeared in the September 7, 1997 issue of Sunday Magazine. 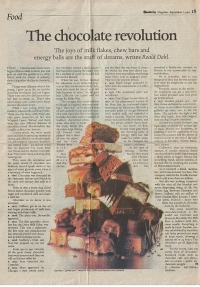 The joys of milk flakes, chew bars and energy balls are the stuff of dreams, writes Roald Dahl.

Today, chocolate-guzzling begins when a child is about five and goes on until the guzzler is 12. After which, with the advent of puberty, there is a gradual decline in consumption.

Things were different when I was young. I grew up in the 20s and the chocolate revolution had not begun. There were very few delicious chocolate bars to tempt us. That’s why sweet shops were called sweet shops and not chocolate shops.

When I was young, there was Cadbury’s Bournville and Dairy Milk. There was the Dairy Milk Flake (the only great invention so far) and Whipped Cream Walnut, and there were also four different flavours of chocolate-coated Marshmallow Bar (vanilla, coffee, rose, lemon).

Consequently, we were much more inclined to spent our money on sweets and toffees or on sherbet-suckers, gobstoppers, liquorice bootlaces and aniseed balls – we did not mind that the liquorice was made from rats’ blood and the sherbet from sawdust. They were cheap and to us, they tasted good.

Then came the revolution and the entire world of chocolate was suddenly turned upside down in the space of seven glorious years. Here is a summary of what happened.

• 1876: Chocolate was first used by the Spaniards, Italians and French in the early 17th century but only as a drink.

Then, in 1876, a Swiss chap called Peters mixed chocolate powder with sugar and condensed milk and made a solid bar.

Chocolate as we know it was invented.

• 1905: Cadbury got in on the act and began production of milk bars, starting with Dairy Milk.

• 1920: The first speciality chocolate bar, the Dairy Milk Flake, was invented. This was a milestone, the first time any manufacturer had seriously played with chocolate in their inventing rooms.

From 1930 to 1937 virtually all the great classic chocolate bars were invented and they are still on the best seller list.

• 1932: Mars appeared. In Chicago, a man whose name was Mr Mars, owned a small factory that had been making the Milky Way bar for a number of years. In fact, he had invented it himself.

When his son, Forrest, finished his education as an industrial engineer at yale, his dad said to him: “Son, there ain’t room for two of us in this little business of mine.” So, he gave him US$5,000 (RM 13,500) and the recipe for Milky Way.

The younger Mars made his way to Slough in England, intent on making a “chew bar”, so he placed a strip of soft caramel on top and then coated it with chocolate. But it is not easy to make chocolate stick to caramel, as Cadbury discovered when, some time later, it made the Curly Wurly. The chocolate kept flaking off. Parents complained that it went all over the carpet, and the Curly Wurlys were withdrawn.

But Forrest Mars had the secret, and the Mars Bar was born. It swept the world, the first ever chewy bar. And very soon 600 million were being eaten every year in England alone. That is 10 per year per person.

• 1933: Black Magic appeared in boxes and, for some reason, it is still a best seller.

• 1936: Don’t forget Forrest Mars. In spite of the phenomenal success of his Mars Bar, he continued experimenting in his laboratory. He took a pea-sized pellet of dough flavored with malted milk and exploded it inside a vacuum. Then he coated the result with sweet milk chocolate, and hey presto, another classic beauty was born! At first, Forrest Mars gave these the charming name of Energy Balls but this made the public smile, so he changed the name to Maltesers.

At the time of writing, Forrest Mars is very much alive. His business is now enormous but has remained a family-run concern, so Forrest is not answerable to any stockholders.

He is, therefore, free to run things as he likes, and the way he likes is to treat his employees as one big happy family.

Everyone shares in the profits – the employees can get a rise every four weeks provided sales have gone up in that period.

• 1937: Another golden year – Kit Kats, Rolos and Smarties were invented. Some 10,000 million Smarties are gobbled up every year in the UK alone. This includes the eight a day (four after lunch, four after supper) that our dog Chopper consumes.

So there you have it. In music, the equivalent would be the golden age of Bach, Mozart and Beethoven. In painting, it was the equivalent of the Italian Renaissance and the advent of the Impressionism at the end of the 19th century; in literature, Tolstoy, Balzac and Dickens.

Cadbury’s, after an enormous amount of market research, found out that what the public liked was not a sharp minty or sugary flavour, but something bland, almost tasteless. It learned this by studying the success of Heinz Baked Beans.

So it invented a bland, tasteless bar, which was actually two bars. The company called it the Double Decker which sold more than 160 million.

But this was nothing compared with the sales of the blandest and most disgusting thing of all, the Creme Egg. Between Christmas and Easter, Cadbury sells 350 million of these fondant-filled horrors. I won’t eat them. Nobody I know eats them. But somebody obviously does, by the bucketful.

The most luxurious chocolate-makers in the world are Fortnum and Mason in Piccadilly. The fifth floor is redolent with delicious smells. Everything is made by hand. Fondant centres are blobbed by hand into soft holes pressed into trayes of loose starch, allowing a natural set of 24 hours. The chocolates are all dipped by hand.

For the record, I am not overly fond of chocolate-flavoured foods such as chocolate cake and chocolate ice-cream. I prefer my chocolate straight.