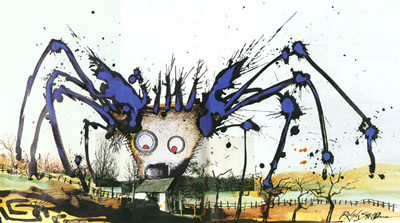 This image portrays the exterior of Roald Dahl’s hut, in fact simply a garden shed, set amidst mushroom fields being stalked by a spider. It was in this hut that Roald Dahl worked every day writing his children’s books, his film scripts, and letters: letting his imagination take him wherever it wished. He sat at an old chair of his mother’s and the hut was filled with bits and pieces. The body of Miss Spider has been fashioned from ‘a small brown cushion at the base of the chair back’ in which Ralph Steadman ‘discovered a roughly cut hole which one day in desperation he had made to alleviate the pressure of abscesses which formed on his spine’. Ralph Steadman writes ‘The room reminded me of an aeroplane cockpit. This was his creative space capsule inside which his imagination blossomed with wild, mischievous ideas.’

Ralph Steadman
Miss Spider and the Hut
ink, watercolour and acrylic with a photographic collage centrepiece
signed and dated ’96
Image size: 59.5 by 84 cm

This picture explores both the fantasy and nightmare elements of the work of Roald Dahl which is often based on and takes its starting point from all things familiar.

“Miss Spider and the Hut” is reproduced across pages 12 and 13 of The Roald Dahl Treasury along with two other images by Ralph Steadman to illustrate his own essay titled ‘The Hut.’ The three illustrations depct the interior and exterior of the hut and are peopled with characters from James and the Giant Peach. The spider in this image being Miss Spider, the first creature James met.