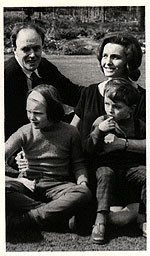 1964 – At Great Missenden after the announcement of Patrica Neal’s Oscar nomination for Hud, with Tessa, aged seven, and Theo, three. Neal was heavily pregnant with Ophelia and decided not to attend the Awards ceremony. After the birth, the family moved to Los Angeles for the filming of Neal’s new movie, 7 Women.