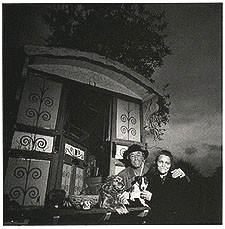 1986 – Tessa Dahl with her father on the steps of the caravan at Gipsy House. Dahl used the caravan as inspiration for Danny the Champion of the World in 1975. He also based the gas station in the story on his first job, and Danny’s teachers were version of those at St. Peter’s, Weston-super-Mare. Even the nocturnal poaching had been one of Dahl’s hobbies.