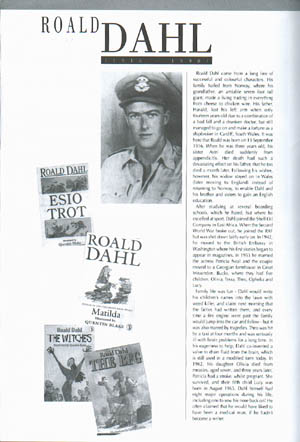 Roald Dahl came from a long line of successful and colourful characters. His family hailed from Norway, where his grandfather, an amiable seven foot tall giant, made a living trading in everything from cheese to chicken wire. His father, Harald, lost his left arm when only fourteen years old due to a combination of a bad fall and a drunken doctor, but still managed to go on and make a fortune as a shipbroker in Cardiff, South Wales. It was here that Roald was born on 13 September 1916. When he was three years old, his sister Astri died suddenly from appendicitis. Her death had such a devastating effect on his father, that he too died a month later. Following his wishes, however, his widow stayed on in Wales (later moving to England) instead of returning to Norway, to enable Dahl and his brother and sisters to gain an English education.

After studying at several boarding schools, which he hated, but where he excelled at sport, Dahl joined the Shell Oil Company in East Africa. When the Second World War broke out, he joined the RAF but was shot down fairly early on. In 1942, he moved to the British Embassy in Washington where his first stories began to appear in magazines. In 1953 he married the actress Patricia Neal and the couple moved to a Georgian farmhouse in Great Missenden, Bucks, where they had five children, Olivia, Tessa, Theo, Ophelia and Lucy.

Family life was fun – Dahl would write his children’s names into the lawn with weed killer, and claim next morning that the fairies had written them, and every time a fire engine went past the family would jump into the car and follow – but it was also marred by tragedies. Theo was hit by a taxi at four months and was seriously ill with brain problems for a long time. In his eagerness to help, Dahl co-invented a valve to drain fluid from the brain, which is still used in a modified form today. In 1962, his daughter Olivia died from measles, aged seven, and three years later, Patricia had a stroke, whilst pregnant. She survived, and their fifth child Lucy was born in August 1965. Dahl himself had eight major operations during his life, including one to sew his nose back on! He often claimed that he would have liked to have been a medical man, if he hadn’t become a writer.