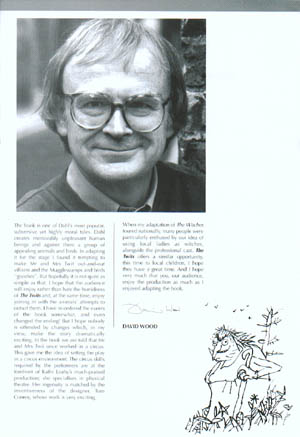 The book is one of Dahl’s most popular, subversive yet highly moral tales. Dahl creates memorably unpleasant human beings and against them a group of appealing animals and birds. In adapting it for the stage I found it tempting to make Mr and Mrs Twit out-and-out villains and the Mugglewumps and birds “goodies”. But hopefully it is not quite as simple as that. I hope that the audience will enjoy rather than hate the horridness of The Twits and, at the same time, enjoy joining in with the animals’ attempts to outwit them. I have re-ordered the events of the book somewhat, and even changed the ending! But I hope nobody is offended by changes which, in my view, make the story dramatically exciting. In the book we are told that Mr and Mrs Twit once worked in a circus. This gave me the idea of setting the play in a circus environment. The circus skills required by the performers are at the forefront of Kathi Leahy’s much-praised production; she specialises in physical theatre. Her ingenuity is matched by the inventiveness of the designer, Tom Conroy, whose work is very exciting.

When my adaptation of The Witches toured nationally, many people were particularly enthused by our idea of using local ladies as witches, alongside the professional cast. The Twits offers a similar opportunity, this time to local children. I hope they have a great time. And I hope very much that you, our audience, enjoy the production as much as I enjoyed adapting the book.