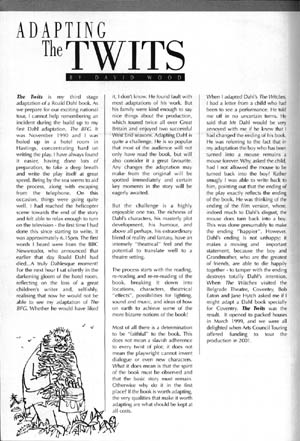 The Twits is my third stage adaptation of a Roald Dahl book. As we prepare for our exciting national tour, I cannot help remembering an incident during the build up to my first Dahl adaptation, The BFG. It was November 1990 and I was holed up in a hotel room in Hastings, concentrating hard on writing the play. I have always found it easier, having done lots of preparation, to take a deep breath and write the play itself at great speed. Being by the sea seems to aid the process, along with escaping from the telephone. On this occasion, things were going quite well. I had reached the helicopter scene towards the end of the story and felt able to relax enough to turn on the television – the first time I had done this since starting to write. It was approximately 6.15pm. The first words I heard were from the BBC Newsreader, who announced that earlier that day Roald Dahl had died…A truly Dahlesque moment! For the next hour I sat silently in the darkening gloom of the hotel room, reflecting on the loss of a great children’s writer and, selfishly, realising that now he would not be able to see my adaptation of The BFG. Whether he would have liked it, I don’t know. He found fault with most adaptations of his work. But his family were kind enough to say nice things about the production, which toured twice all over Great Britain and enjoyed two successful West End seasons. Adapting Dahl is quite a challenge. He is so popular that most of the audience will not only have read the book, but will also consider it a great favourite. Any changes the adaptation may make from the original will be spotted immediately and certain key moments in the story will be eagerly awaited.

But the challenge is a highly enjoyable one too. The richness of Dahl’s characters, his masterly plot development, his humour, and above all perhaps, his extraordinary blend of reality and fantasy, have an intensely “theatrical” feel and the potential to translate well to a theatre setting.

The process starts with the reading, re-reading and re-re-reading of the book, breaking it down into locations, characters, theatrical “effects”, possibilities for lighting, sound and music, and ideas of how on earth to achieve some of the more bizarre notions of the book!

Most of all there is a determination to be “faithful” to the book. This does not mean a slavish adherence to every twist of plot; it does not mean the playwright cannot invent dialogue or even new characters. What it does mean is that the spirit of the book must be observed and that the basic story must remain. Otherwise why do it in the first place? If the book is worth adapting, the very qualities that make it worth adapting are what should be kept at all costs.

When I adapted Dahl’s The Witches, I had a letter from a child who had been to see a performance. He told me off in no uncertain terms. He said that Mr Dahl would be very annoyed with me if he knew that I had changed the ending of his book. He was referring to the fact that in my adaptation the boy who has been turned into a mouse remains a mouse forever. Why, asked the child, had I not allowed the mouse to be turned back into the boy? Rather smugly I was able to write back to him, pointing out that the ending of the play exactly reflects the ending of the book. He was thinking of the ending of the film version, where, indeed much to Dahl’s disgust, the mouse does turn back into a boy. This was done presumably to make the ending “happier”. However, Dahl’s ending is not unhappy; it makes a moving and important statement, because the boy and Grandmother, who are the greatest of friends, are able to die happily together – to tamper with the ending destroys totally Dahl’s intention. When The Witches visited the Belgrade Theatre, Coventry, Bob Eaton and Jane Hytch asked me if I might adapt a Dahl book specially for Coventry. The Twits was the result. It opened to packed houses in March 1999, and we were all delighted when Arts Council Touring offered funding to tour the production in 2001.