I’ve managed to locate several references to The Honeys in the archive of The New York Times, which show the fascinating progression of the show from pre-production through to premiere and ultimately cancellation.

From Gossip of the Rialto by Lewis Funke:

Frederick Knott, creator of “Dial M for Murder,” is back at playwriting. Mr. Knott who, since his arrival here from England, has taken himself a wife and settled down on these shores–and, as a true member of the writing fraternity, has seized upon the required adjustments as excuses to remain away from his typewriter–is engaged on a new mystery play.

This one is to be a collaboration with another celebrated countryman, Roald Dahl, whose collection of short stories, “Someone Like You,” recently brought out by Knopf, will provide the material for the script. Mr. Dahl, a prolific writer of short stories and novels (many will remember him for “Some Time Never,” a fable about the gremlins who plagued the RAF) is due here next month from his native heath. As a result of extensive correspondence, the Messrs. Knott and Dahl now have a rough synopsis and it is entirely possible that face-to-face they’ll be getting a script finished in time for production by Cheryl Crawford this season.

From Work by Menotti Arriving Tonight by Sam Zolotow:

Back in September it was reported that Frederick Knott, author of the intriguing “Dial M for Murder,” was turning out a joint mystery play with Roald Dahl, winner of a prize from the Mystery Writers of America for the best short story in his volume, “Someone Like You.” Emanating from material in Mr. Dahl’s omnibus, the collaboration was to go to Cheryl Crawford.

To come to the point: The collaborators have separated. On his own, Mr. Dahl, who is the husband of Patricia Neal, the actress, has just completed an original comedy, not titled yet, with murder mystery complications involving two married women.

Miss Crawford said yesterday it was her intention to bring the play to the stage as soon as possible. Seven characters will share the responsibility of developing the plot in Mr. Dahl’s initial attempt at playwriting. Miss Neal will not be one of the performers.

From ‘The Fourposter’ Returns Tonight by Sam Zolotow:

Elsewhere it was learned that the Cronyns are sought by Cheryl Crawford for Roald Dahl’s “Ring Out the Old” (tentative title). With a soupçon of mystery in it, this one almost borders on face, according to Mr. Dahl. The theme, he says, concerns murder vs. divorce and which of the two is handier in getting rid of an undesirable husband.

Although seven actors are to be employed, don’t take it for granted there will only be seven characters in it. The conception of “Ring Out the Old” isn’t new. Mr. Dahl advises it is based on material from two of his short stories–one from his collection in “Someone Like You” and the other from The New Yorker. For obvious reasons, the playwright declined to identify them.

From Rialto Gossip by Lewis Funke:

With Jessica Tandy, Hume Cronyn and Dorothy Stickney as co-stars, Cheryl Crawford’s production of Roald Dahl’s comedy, “The Honeys,” should be here in mid-April…

From ‘Strip for Action’ is Going Musical by Sam Zolotow:

The Longacre will receive “The Honeys” on April 14. Started in Cheryl Crawford’s production of the Roald Dahl comedy are Jessica Tandy, Hume Cronyn and Dorothy Stickney. “Tea and Sympathy,” the Longacre’s current tenant, has no intention of closing. According to the management, the long-run drama will be moved to another house.

From Menotti’s ‘Saint’ May Drop Shows by Sam Zolotow:

“By mutual agreement,” Reginald Denham has resigned as director of “The Honeys,” starring Jessica Tandy, Hume Cronyn and Dorothy Stickney. Mr. Denham’s withdrawal will not alter the scheduled première of the Roald Dahl comedy at the Longacre on April 14, according to Cheryl Crawford, sponsor. Until another director is corraled, Miss Crawford will grip the directorial reins herself.

From Jazz to be Basis of New Musical by Sam Zolotow:

On the sick list with influenza is Dorothy Stickney, one of the stars in “The Honeys,” now trying out in Boston. Since Friday night the part has been played by Frances Woodbury, understudy. Miss Stickey, it was said, is expected back in a day or two.

Polishing is the order of the day in the Roald Dahl comedy. All of which finds Hume Cronyn, co-star, still doubling as director, a post he assumed on a temporary basis when Reginald Denham quit.

After this week, the role held by Paul Lipson will be eliminated and there is a possibility of another one being dropped, too. Despite the vexing problems, business continues on a prosperous level, according to Cheryl Crawford, sponsor.

From News and Gossip Gathered on the Rialto by Arthur Gelb: 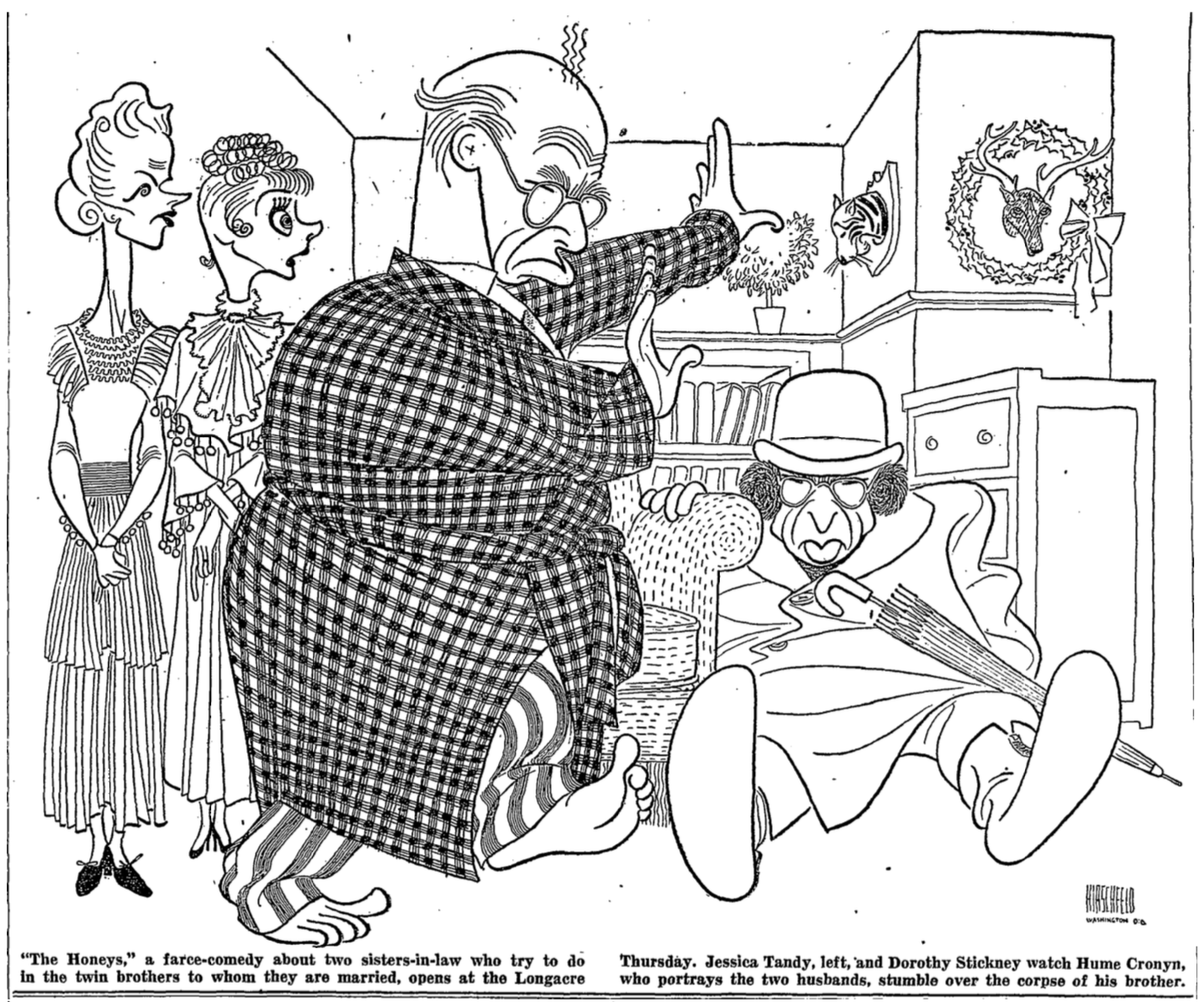 “The Honeys,” a melodramatic farce by Roald Dahl, co-starring Jessica Tandy, Hume Cronyn and Dorothy Stickney, has its Broadway première tonight at 8 at the Longacre Theatre.

Cheryl Crawford is producer of the comedy that tells of the efforts of two sisters-in-law who attempt to rid themselves of their crusty and cantankerous husbands. The scheming wives are portrayed by Miss Tandy and Miss Stickney, while Mr. Cronyn doubles in the roles of the twin husbands. Mary Finney is featured in the part of a window who already has successfully “shed” her mate. Dana Elcar is the only additional member of the cast.

Frank Corsaro has staged the production for which Ben Edwards has provided the scenery. The costumes are by Motley.

From Rialto Gossip by Lewis Funke:

SCOREBOARD: Roald Dahl’s face, “The Honeys,” received a mixed reaction from the aisle-sitters. Two liked it, Robert Coleman of The Mirror, for example, calling it “inspired lunacy.” In addition, there was a yea from John McClain of The Journal-American, who thought it hilarious but warned his clients that its humor was “extremely special.” William Hawkins, of the World-Telegram and Sun, said it was “too slight and elongated *** to survive with any less perfect and charming playing than it gets from this cast.” Three judges, including the local man, simply didn’t like it. The local man: “Mr. Dahl is asking for but not achieving the mad mood required.”

From Comedy by Lumet Arrives Tonight by Sam Zolotow:

‘The Honeys’ to Close

“The Honeys” drops out of contention after its thirty-sixth performance on Saturday night at the Longacre. Starring Jessica Tandy, Hume Cronyn and Dorothy Stickney, the farce comedy by Roald Dahl was escorted to Broadway by Cheryl Crawford.

From ‘All in One’ is Set to Close Tonight by Louis Calta:

…In addition to “All in One,” tonight’s departures include “The Honeys,” the Roald Dahl comedy, co-starring Jessica Tandy, Hume Cronyn and Dorothy Stickney…

From Opening Tonight for ‘Red Roses’ by Sam Zolotow:

Not discouraged by the short New York run of “The Honeys” last season, Roald Dahl is revamping the entire script. In its new guide and under another title, Emile Littler will present the altered version in London over the summer. Over there the emphasis will be placed on broad farce, Mr. Dahl reported yesterday. The role originated by Dorothy Stickney probably will be played by Hermione Badeley.