Roald Dahl’s Willy Wonka is a musical play that combines elements of both Roald Dahl’s book Charlie and the Chocolate Factory and of the 1971 movie Willy Wonka & the Chocolate Factory with newly created material. The play has several versions: the original version which premiered in 2004, the Junior version, the Kids version, and the Theatre for Young Audiences version. All are owned by Music Theatre International, the company that owns the Willy Wonka license. 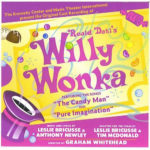