ESCAPE opened with the gripping voice of William Conrad booming out over the airwaves: “Tired of the everyday grind? Ever dream of a life of romantic adventure? Want to get away from it all? We offer you – ESCAPE!”. Moussorgsky’s “Night on Bald Mountain”, the show’s theme, assisted Conrad in creating the right opening atmosphere. (The actual series of questions used in the opening varied from week to week, frequently to match the goings-on of the times.)

[Description from Old-Time Radio, an excellent source of information] 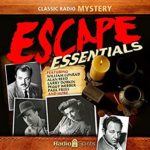