Special thanks to Stephen Jarvis  for providing this information! 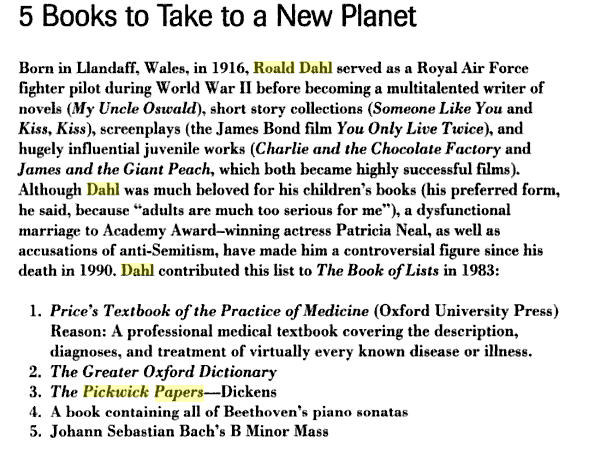 ROALD DAHL’S 5 BOOKS TO TAKE TO A NEW PLANET

Born in Llandaff, Wales, in 1916, Roald Dahl served as a Royal Air Force fighter pilot during World War II before becoming a hugely successful writer of novels (My Uncle Oswald), short-story collections (Someone Like You and Kiss Kiss), screenplays (the James Bond film You Only Live Twice) and highly influential juvenile works (Charlie and the Chocolate Factory and James and the Giant Peach, which both became highly successful films). Although Dahl was much beloved for his children’s books (his preferred form, he said, because ‘adults are much too serious for me’), a dysfunctional marriage to Academy Award-winning actress Patricia Neal, as well as accusations of anti-Semitism, have made him a controversial figure since his death in 1990. Dahl contributed this list to The Book of Lists in 1983.