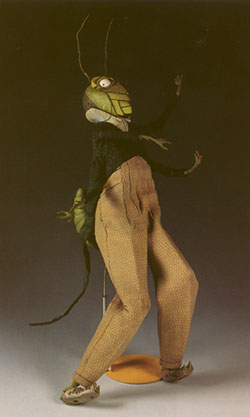 ‘The Old–Green–Grasshopper became a member of the New York Symphony Orchestra, where his playing was greatly admired.’

Fully Armatured Production Grasshopper Puppet
for the Walt Disney production of Roald Dahl’s James and the Giant Peach, 1996
The Puppet: 40.6 by 20.3 cm

This Grasshopper Puppet is sold with 23 mouths, 25 eyebrows and 2 eyes.

Simon Callow was the voice of the Grasshopper in the film for which Lane Smith was the conceptual designer.