In August 2001, Robertson’s (a jam-making company in England) announced that they would be replacing the character “Golly” that traditionally appeared on their jar labels with a series of Quentin Blake illustrations of Roald Dahl characters. (If you’re interested in learning more about Robertson’s use of the Golly, I recommend this page.) A series of collector’s badges would also be available by sending in tokens from the labels. This series ended in 2006. 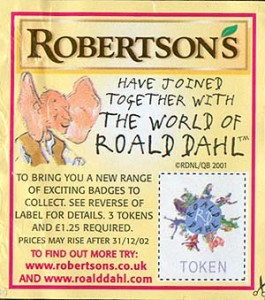 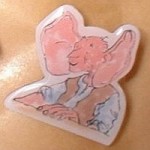 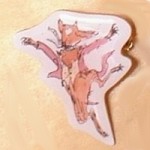 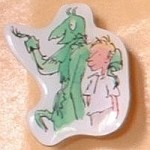 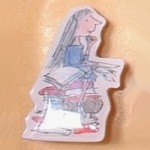 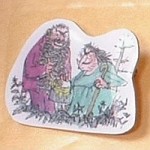 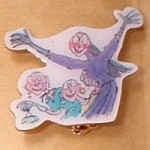 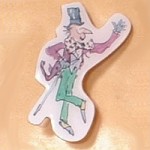 As every Roald Dahl fan knows, his books are jam packed with good stuff. Now Robertson’s, producers of the UK’s favorite jams and marmalades, have decided to enter into a special partnership with The World of Roald Dahl to launch a brilliant badge collecting scheme.

Robertson’s, famous for its historic Golly collector’s badges, expects the World of Roald Dahl badges to spark widespread interest amongst a new generation of collectors.

The seven badges are just the beginning of the badge scheme and Robertson’s links with the World of Roald Dahl. Robertson’s were so impressed with roalddahl.com that they commissioned the roalddahl.com team to create their very own website — robertsons.co.uk.

Check out robertsons.co.uk for the full lowdown on the Robertson’s World of Roald Dahl badges plus brand new material on Roald’s life and work. There’s a new Revolting Recipe, created just for the site by the chef behind Roald Dahl’s Even More Revolting Recipes. The site creators are especially proud of the wondercrump game which premieres on robertsons.co.uk and is called Willy Wonka’s Intergalactic Jam.

Keep your eyes on both roalddahl.com and robertsons.co.uk for more exciting link-ups in the future!