Some of these Winning Moves Games can be purchased on Amazon.com.

Developed in collaboration with the Roald Dahl Story Company and featuring Sir Quentin Blake’s illustrations, the monopoly game enables players to choose one of six new tokens to plat with – Matilda’s books, Jame’s Giant Peach, Mr Fox’s chicken, George’s Marvellous Medicine, a Wonka candy and a boy turned in to a mouse.

Players can then navigate the board to secure Crunchem Hall or pay Mr Wormwood, take their chances with a Wonka bar or Golden Ticket card, and more.

Join Sophie and The BFG on their adventures across the world saving England from nasty giants, with the help of Her Majester the Queenie!

Visit London, Giant Country and of course, the Queen’s Palace, as one of six original playing pieces.

Will you have a phizzwizard or a trogglehomper? Will you pay for the bus and taxi? Will you collect snozzcumber and frobscottle?

This duper squiffling Monopoly game brings the magical new movie into your own home! 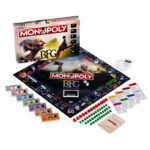 Charlie and the Chocolate Factory Game
A magical board game based upon the all-time best-selling children’s book, “Charlie & the Chocolate Factory,” by Roald Dahl. Children enter their fantasy world inside Willy Wonka’s factory as they try to be the first to collect 6 different candies and reach the great glass elevator.

Charlie and the Chocolate Factory Board Game

Fantastic Mr Fox Game
Follow the adventures of Fantastic Mr Fox as you make your way around the board. A simple but engaging game to get younger chilren excited about board games.

The Twits Card Game
An original and unique card game in which players indulge in dirty tricks campaigns to spoil their opponents’ chances of winning. Whoever’s meanest wins!

Top Trumps – Roald Dahl
From Roald Dahl’s beloved books, his goodies and baddies come face-to-face in this fantastic Top Trumps game. Featuring characters from The BFG, Matilda and Charlie and the Chocolate Factory, play along and see who is the greediest and brainiest, the mischievous and the most cunning!

A great way to introduce children to the exciting world of Roald Dahl characters, and the perfect portable game to take on day trips and holidays.

Top Trumps – The World of Roald Dahl: Goodies and Baddies

A limited edition of the Top Trumps game featuring Roald Dahl characters. Each card contains a list of numerical data, and the aim of the game is to compare these values to try to trump and win an opponent’s card.

The Giraffe and the Pelly and Me Jigsaw Puzzle
50 piece jigsaw puzzle. Beautiful artwork from Quentin Blake on robust, hard-wearing cardboard pieces.

The Giraffe and the Pelly and Me Jigsaw Puzzle